“There is no spring without flowers, no summer without warmth”.

As the saying goes, spring is the flower season par excellence.

And with flowering plants come all their natural perfumes. The intensity of the perfumes of the flowers varies greatly from one plant to another: some release it for many metres around, wanting to attract the attention of the passer-by, like the orange blossom of orange trees.

Others, such as roses, are more discreet, their fragrance only perceived in the proximity of the plant.

Almost all of them have a moment in the day when they begin to release their aroma.
In general, white flowers are the ones that most perfume the night. Their aroma, together with their colour, makes them stand out at night, serving as a guide for night owls.

The jasmine, the ladies of the night, the amber cane, the lilies and the orange blossoms are at their best moment in the dark, releasing a dense and sweet perfume that fills the air with exoticism.

Plants with brightly coloured flowers, such as yellow or blue and lilac, tend to activate their fragrances during the day, such as bird of paradise flowers, lilacs and lavender, and are visited by many daytime insects.

Human beings have always had a predilection for flowers.

Our taste for flowers

It is indisputable that flowers beautify the environment, and many studies prove that they positively influence our mood. And if you feel good, you will be more productive.

In addition, in many cultures, flowers are synonymous with creativity and harmony, and satisfy all the senses. It is believed that in the absence of imagination, keeping the environment full of flowers promotes creativity.

There must be something about flowers, as humans have collected them and used them for over 6,000 years:

In ancient Greece, each deity had its own symbolic plant, and their temples were decorated with its flowers. For example, red and white roses were dedicated to Aphrodite; the cypress, to the god of death Hades, and the white lilium, to the goddess Persephone. The temple of Dionysus, god of the harvest, was decorated with ivy and grape leaves. And the temple of Hymenaeus, god of marriage, with the myrtle.

Not only do we decorate with natural flowers themselves, but humans have also always decorated any surface with natural and floral motifs: walls, fabrics, textiles and ceramics have been adorned with designs of flowers since the beginning of time.

The existence of rock art reflects this.

Floral decoration is also intricately linked to another art: pottery.

Pottery is the art of making objects made with baked clay.

This art is one of the most important inventions of mankind.

The invention of pottery occurred during the Neolithic Age, when containers became necessary to store surplus crops produced in agriculture. It was a real revolution to be able to store and transport products, especially liquids in ceramic containers.

In fact, the oldest ceramic remains found in the world date back over 20 thousand years and are fragments of a large bowl found in the Xianrendong cave, in Jiangxi province, China.

Chinese ceramics and porcelain are the most traditional and their technical and stylistic innovations have influenced other countries, first in the East and later in Europe and America.

The lathe began to be used in China, and this is where the decoration of art with natural motifs: floral and marine was born.

Ceramics and perfume, a couple with a lot of history

When we speak of scented ceramics, we refer to a figure made from a porous ceramic to which aromatic essence or perfume is added. The ceramic will slowly release the perfume, whilst also serving as a decorative element.

We do not know for sure when this type of pottery was born. What we do know is that, in ancient times people were knowledgeable about the properties of materials, and they knew that not all had the same aromas: alabaster, for example, was a particularly valued stone, since it was waterproof and watertight, although expensive. Ceramic, which was popular for storing perfumes in Greece, was replaced in Rome by glass, which also had excellent storage qualities, but was a much more affordable material.

Perhaps at some point it was noticed that perfume packaged in very porous ceramics slowly escaped, pleasing anyone who might become aware of its presence. 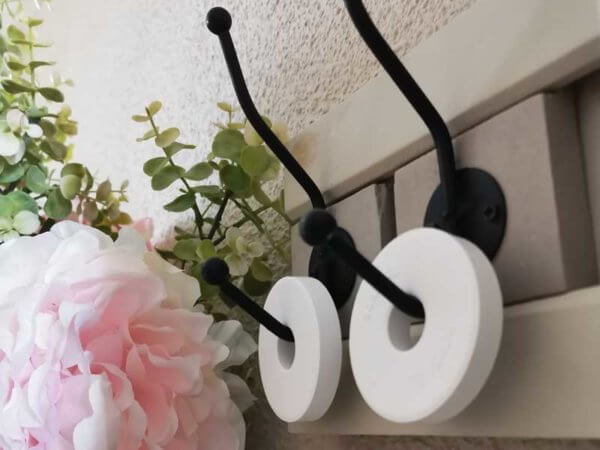 The curious case of the Poor Clare Nuns’ scented ceramics

The Poor Clare Nuns were originally from Italy and settled in Spain around the 13th century. They played a primary role in the Christianisation of America.

They made a very particular type of pottery.

“The nuns’ pottery is of a special kind, which is no longer made. It was of fine workmanship, beautiful colouring and characteristic perfume.” Text extracted from the Chilean Encyclopaedia

It has only been recognised that its ingredients included clay, fine sand and kaolin. It is also known that it was baked at a low temperature.

They were small decorative pieces, not intended for everyday use. It is said that these ceramics appealed to the five senses.

The visual and tactile objective is clear as they are small pieces of ceramics, highly decorated in the Baroque style.

The scent of flowers gave them their special fame, and appealing scent.

The sense of hearing was also involved because some of their little feet have moving parts and produce a very characteristic sound.

The most picturesque part is that they also appeal to taste, because at some point it was “fashionable” among Spanish women of baroque high society to eat small pieces of certain ceramics. The objective was to achieve the epitome of beauty, based on the fragile and sickly appearance of women whose maximum interest was to have an extremely pale face.

Today, ceramics are still very present in our lives. There are many ways in which ceramics are used today: pottery, manufacture of construction materials (bricks, tiles, etc.), industrial applications, refractory materials, insulation, etc.

We are specialists in scented ceramics.

The porosity of the ceramic allows us to create pieces that gradually evaporate the essence and maintain its aroma for months.

Our production process sits between the artistic, the technical, the professional and the handmade. We tell you about it here.

In the image we show you two of our porous ceramic pieces scented with the scent of spring and almond blossom, an essence as ideal as the season of the year in which we find ourselves today.